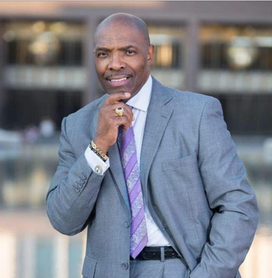 ﻿Bishop Effell Williams is a native of Sumter County Alabama, and is the son of the late Mr. Perry Williams and the late Mrs. Bonnie Williams.  He is a graduate of Sumter County High School in York, Alabama, and the University of West Alabama (formerly Livingston University) in Livingston, Alabama where he received both his Bachelor Degree in Business Administration and a Masters in Guidance and Counseling.  He also holds a Bachelor Degree in Theology from Christian Life School of Theology in Columbus, GA.  He also holds an Honorary Doctor of Theology Degree from St. Thomas Christian College and Seminary in Jacksonville, Florida.  While in college, Mr. Williams was a 4-year letterman in basketball, a member of the Kappa Alpha Psi Fraternity, member of the L-Club, member of the biracial committee, and a member of the Student Government Association.

Mr. Williams began his professional career in 1977 as Director of Housing at the University of West Alabama, and became Director of Student Support Services at Wallace Community College Selma in 1982.  He became Dean of Students at Wallace in 1995.  He retired from Wallace Community College in December of 2000.  Mr. Williams has been a member to the Alabama Association Of Educational Opportunity Program Personnel (where he serviced as past- president), Vice-President of the Alabama College System Deans of Students Affairs, former trainer for National Council of Educational Opportunity Association, member of Selma Christian Ministries, YMCA, National Association of Educational Opportunity Program Personnel, member of Habitat Selma, and many other groups and associations.

Mr. Williams is the founder of the Community Empowerment Development, Inc., a non-profit organization founded to provide services to disadvantaged youth in Selma and Dallas County.  This includes mentoring, counseling, group sessions, advising, and educational services.  He is also Cofounder of the HEAL Program, formed to provide services to first time misdemeanor offenders for the City of Selma Court System.  This includes counseling, group discussions, family counseling, etc.

Mr. Williams is also the founder of the AL/MS Fellowship of Churches.  Churches from across Alabama and Mississippi are members united to form a fellowship of churches for the furtherance of the Gospel and empowerment of the body of Christ.

Mr. Williams received the 2013 Humanitarian Award from The Alabama People Choice Award organization in February of 2013. He is also cofounder of the SAVE Organization here in Selma, AL.  The mission of the organization is to serve in four key areas of the community: Youth, Community, Spiritual, and Leadership.  The goal is to put a save house in each ward of the city, continuous youth activities, collaboration for other organizations and leadership within the city to help prevent youth violence, address health issues, and improve the overall quality of life for the citizens of Selma and Dallas County.

Mr. Williams was a “2013 TOP PASTORS OF EXCELLENCE AWARD” recipient for the Rhythm of Gospel Award Program in July of 2013.  He is the founding pastor of the Tabernacle of Praise Church, Inc., of Selma, with sites in Uniontown, Birmingham, and soon to be Montgomery, AL.  The church has several ministries to both the adult and youth of the community.  Tabernacle of Praise Church also sponsors the VICTORY IN PRAISE CONFERENCE each year in February which brings in nationally known speakers from around the country.  The Church services can be heard on radio station WHLW Hallelujah104.3FM. at 7:00 P.M. each Sunday night.  Also, the services can be heard each day, Monday through Sunday on The Preaching App on-line.  Mr. Williams is married to the former Brenda Faye Smith of Lisman, Alabama.  He has three children, Alesha, Andrea, and Effell Jr.  One granddaughter, Ambrielle, and two son-in-laws, Pastor Wade Jackson and Jarrod Pope.